Beer and Brats at Restaurant Café “Am Marienplatz” München

Emerging from the S-bahn (railway system) in München, I was immediately taken aback by just how beautiful and 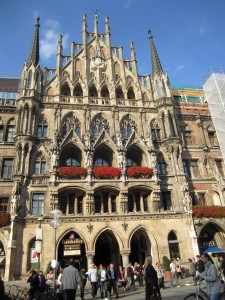 clean the city was. Even with the raucous Oktoberfest festivities going on it was still pristine.

I am such a cliché, but the first thing I wanted when I got to München was some sauerkraut and brats. So, wondering around Marienplatz, the central square, my brother and I came across Restaurant Café “Am Marienplatz.” Seeing that it had authentic German fare it seemed like just the place I was looking for.

The restaurant boasts a large patio area, which is perfect for being right in the middle of all the action. Beings it was crowded that night we ended up sitting inside. The interior of the restaurant had that classic pub feel with dark wood and low lighting. Stained glass pictures like the one by our table with a guy looking up a girl’s dress illuminated the tables.

When the waiter handed us the menu, I was relieved it to see it was in English. (Honestly, I think my attempt at speaking German is more offensive than not trying at all…but I digress.)  The menu offered a plethora of sausages – 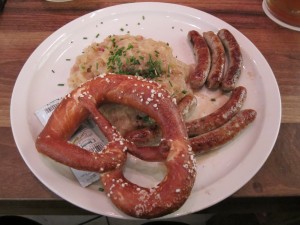 currywurst, bratwurst and Weisswurst (original Munich white sausage). I ended up going with the Rostbratwurst served with sauerkraut and a pretzel.

But let’s get to the important part…the beer. The restaurant has a nice selection, but being partial to lighter wheat beers I went with the Paulaner Hefe Weisse. Since this was my first German restaurant on the trip I didn’t realize the standard size for beers is a liter, which essentially made it a meal in in itself…a very tasty meal. (Later, when I asked if I could purchase said mug the waiter told me to put it in my purse and just take it.)

Restaurant Café “Am Marienplatz” was like my own little corner of München. I could have easily found the same food and beer elsewhere, but there was just a certain something that always pulled me back here. Some of my favorite memories of München began and ended here, and I suppose that is why I remember it so fondly.


Especially, the part where we met those guys who paid for our night out. 🙂 The not fond part – the costly cab ride back to the hotel. 🙂

A site to see – the best spots in Munich ‹ Instant Grativacation


[…] that says merriment like the end of a plague. And what better way to spend an afternoon than with a beer in hand watching […]