Christmas in Las Vegas: Tips, Tricks and the Final Verdict 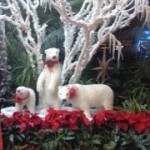 If you love Vegas as much as us, it makes sense that you would want to take any opportunity to make the trip. Or so I thought.

I knew that Christmas was one of the busiest times of the year in Las Vegas, but I wasn’t quite prepared for the amount of people and the way certain places and activities were crazy-busy while other spots were ghost towns. Luckily the weather was on our side, so no complaints there this time around, but read on for my overall assessment of spending Christmas in Vegas and what you should know if you are considering making a future trip during the holidays.

Despite the giant crowds that persisted through much of the trip, but not where it counted, it was a fun time. I saw the Phantom of the Opera at the Venetian for the second time, we watched the very enjoyable Vegas! The Show and had a few good meals. While any time is fun in Vegas, I wouldn’t recommend the holidays as a good time to go. Wait until the new year so that the crowds are a more consistently distributed and you have more options on where to eat, shop and stay. While many places were decorated for the holiday, it definitely didn’t feel like the holidays, so if you love that Christmas/Chanukah feeling, the type of magic Vegas is known for isn’t going to help you recreate it.