It has been said that you should spend New Years in Paris at least once in your life. So, after watching “Midnight in Paris” and enjoying copious amounts of wine on Christmas Day I decided this was the year for me to take such a trip. I booked my flight and hotel, and was off to Paris less than eight hours later. 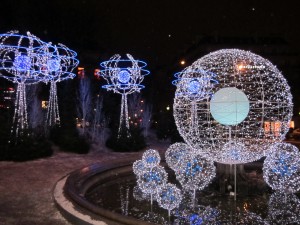 People always talk about Paris in springtime, but I think there is something beautiful and understated about Paris in the winter. The city glitters with Christmas lights, and outdoor markets spring up all around the city just for the holidays. It also happens to be a more budget friendly time of year to visit the “City of Light.” I was able to get a hotel for just $90 USD a night.

If you do decide to visit Paris in December just be prepared for capricious weather conditions. It was around 34 degree Fahrenheit and rained off and on most of the time I was there. Be sure to pack a heavy jacket, scarf, boots, gloves and umbrella, and you will be ready to take on the city.

While many travel sites claim that December in Paris is decidedly calmer with fewer tourists, I still found the city to be bustling. You should expect long waits at the main tourist attractions around the city. I spent over two hours in line to visit the Catacombs and it took about 30 minutes to get a ticket to the Louvre. 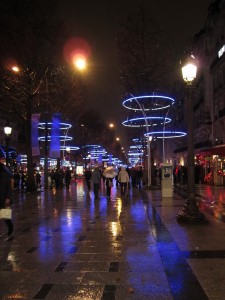 All that said, the best part about visiting Paris during the holidays is getting to take advantage of the outdoor markets that take root all around the city. These wooden chalets sell everything from jewelry and scarves to vin chaud (warm wine) and crepes. By far the grandest market is along the famed Champs-Élysées. The whole avenue is aglow with lights and decorations, and there is a certain excitement that lingers in the air.

The Champs-Élysées has also become a very popular spot to ring in the New Year. People line up and down the street ready to pop their champagne when the clock strikes midnight. Since it’s supposed to be the center of the party I headed there to scope out the scene. Unimpressed by the vibe and unable to get a good view of the Eiffel Tower, I headed toward the Seine and took up shop by Pont de l’Alma where I was able to see the tower in plain view. This area also had plenty of excitement as vendors lined the street selling food, champagne and plastic flutes to revelers.

As it turned to midnight the crowd erupted in cheer and shouted, “bonne année!” The sparkling lights on the Eiffel Tower seemed to dance. While there is no official firework show, many can be seen around the city as people party into the early hours of the morning.

Ernest Hemingway once said, “Paris is so very beautiful that it satisfies something in you that is always hungry in America.” I think anytime is a good time to visit Paris. It has a way of filling you up, and making you feel like anything is possible. I can’t think of any place better to rein in the New Year. 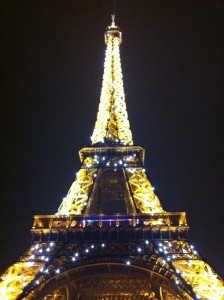 For a good choice of hotels with discount prices, visit Hotel in Paris for more information.


What a fantastic idea! Sounds like you had a great trip.


Thanks John! Happy New Year! It was an awesome trip. I am clearly not into the whole planning thing. 🙂

Putting on The Ritz at the Hemingway Bar ‹ Instant Grativacation


[…] my recent trip to Paris I got food poisoning, which is never a treat but presents a whole new set of challenges […]