After ordering a Bloody Mary at a café in Paris and receiving tomato juice, vodka, celery salt and TABASCO® – all separately – I was starting to think that mixology was a lost art in Europe. Not one to be defeated I decided it was time to track down Harry’s New York Bar where as legends have it the Bloody Mary was created.

Another stop on my literary drinking tour, Harry’s New York Bar was frequented by F. Scott Fitzgerald and Ernest Hemingway. (I was really starting to understand how they found inspiration for all their great works.) The bar was founded in 1911 as the New York Bar, and later became Harry’s New York Bar in 1923 when Harry MacElhone purchased the place. It bills itself as the “oldest bar in Europe,” but this place is more American than European. Old pennants from colleges across the U.S. line the walls. So, it is no surprise that it became a popular hangout for American expatriates. 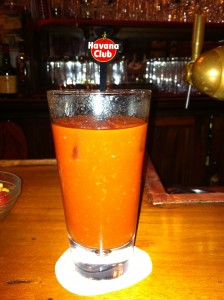 It was in the early afternoon when I dropped by, so there were only a few people at the bar. Looking to put the traumatic Bloody Mary experience from earlier that morning behind me I ordered, “Un Bloody Mary, s’il vous plaît.” Apparently, the jig was up, because the bartender responded with, “Sure one Bloody Mary, mademoiselle.” Since I had already showed my hand, and that was really the extent of my French I was slightly relieved I did not have to keep that charade up.

A short time later the bartender retuned with my drink.

The Bloody Mary at Harry’s is composed of lemon juice, TABASCO®, Worcestershire sauce, salt, pepper, tomato juice and vodka. This is no premade mix – everything is done fresh to order. The result is a deep red color and a fresh and complex tasting Bloody Mary. Don’t expect any fancy garnish with your drink. As the bartender told me the best way to create a Bloody Mary is to, “keep it simple.”