My Visit to Vatican City

“Without having seen the Sistine Chapel one can form no appreciable idea of what one man is capable of achieving.” – Johann Wolfgang von Goethe, 1787

The thought of not visiting Vatican City while in Rome seemed sacrilegious even for someone like me who is not a church goer. The city state is one of the best connections to the past with artifacts and art from the Renaissance era.

On the day I went to visit the Vatican the temperature was a sweltering 90 degrees Fahrenheit. In typical fashion, I got lost on the way there, so the city appeared almost out of nowhere.

Stepping into St. Peter’s Square one has to wonder how it would ever be possible to miss such a grandiose site. With the sun shining brightly on the Basilica a sort of halo formed around it. After sitting in awe for a few minutes and trying to understand the magnitude of such a site, I departed and made the 10-minute trek to the museum.

The sidewalks were thick with people also making the journey to the museum as well as a seemingly never-ending amount of tour group companies pestering you to spend more money with them. The humidity was like a wall at times and I was completely overdressed for the weather in order to adhere to the Vatican’s strict dress code.

Inside, there were herds of confused tourists about what line they were supposed to be in, but we all pushed forward until finally we were in the courtyard. Not really sure where to go and nearly delirious from the heat and failure to eat breakfast that morning, I chose a path and marched on.

The rooms in the museum were so packed with people it was like I was stuck in a current and the undertow might take me under. But as I got bearings I was finally able to see all that was around me. Raphael’s The School of Athens. Leonardo da Vinci’s St. Jerome in the Wilderness. Michelangelo’s The Entombment of Christ. It was like the hall of fame for art’s greats. I was amazed at how some people seemed to rush through the rooms forging ahead.

And just in the way I seemed to stumble upon the Vatican, it once again happened when I made it to the Sistine Chapel. Lost in a sea of people it seemed like I just happened upon it. I am not sure if it was delirium, but at that first moment of seeing the chapel a wave of emotion came over me and I began to tear up.

It is hard to describe the full impact of such a historical site, so I won’t try and will just say that in this case the old cliché rings true, and a picture really is worth a 1000 words. 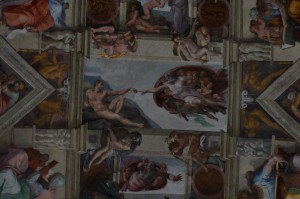 After nearly six hours the last stop on my itinerary was St. Peter’s Basilica. A most beautiful church abound in history with lots to offer in its own right. At this point I had grown weary and my main objective was to see Michelangelo’s Pietà.

In college I took a few art classes and had studied the Pietà extensively, and for me it is one of the single most important pieces of art. Seeing it in-person -albeit from many feet away and behind a glass wall – it was more than I could have imagined.

At the end of a very long day, it was hard to process everything I had just seen and experienced. And I am not sure that you ever actually do, but rather you are left with tiny imprints from the sites and the feelings you experienced along the way.