If you are eating all your meals by the tourist sites then chances are you are paying ridiculously high prices and getting subpar food. The only way to find the gems are by asking the locals where to go, which is how I found Al Duello in Rome.

One evening out I met an American expat who had been living abroad for some time and was working at Al Duello. Sharing my love for good food and wine he suggested I stop by the following night. Always looking for my next good meal, I kindly obliged.

Al Duello is nestled away in an alley that you could just as easily pass. It is one of those hidden spots that only one really in the know would be aware of. As such, the place was filled with locals and abuzz with chatter in Italian. It was quintessential Italy, and possessed the type of authenticity I strive for when traveling.

The staff was attentive and kindly accommodated my absent Italian. I am of the mind that nobody knows the menu better than the staff, so I like to ask for their opinions. In this case, they were more than willing to make wine and food suggestions and did not steer me wrong.

Any meal that begins with cheese is off to a good start, so I chose one of the specials that night, the burrata cheese, as an appetizer. With a decadent cheese like burrata there needs to be only one star, so it begs for a simple preparation like the one chosen by the chef, which showed it in its best light.

Set on a bed of lightly seasoned mixed greens, the creamy burrata was accented with hearty beets, which provided just the right amount of earthiness to ground the dish. It was finished with a light drizzle of olive oil. While one could easily eat this by the fork full, I chose to smother it on the crusty bread that was plentiful at the table.

At the recommendation of my server I went with the carbonara, a dish with origins in Rome, for my main course. While we may indeed eat with our eyes first, this dish awakened all my senses when it was placed before me. The smell of the melting Parmesan across the fresh pasta had my mouth watering even before the first bite.

Carbonara requires skillful preparation or you just end up with scambled eggs and pasta, but when done properly greatness is achieved. The egg produced a creamy, rich golden texture that coated the noodles. Combined with the saltiness of the crispy pancetta and Parmesan cheese, I am convinced this is the dish of the Gods.

It is hard to believe that I would need dessert after the first two courses, but somehow no matter how full I am there is always a spot for it. While typically I like to branch out and try new dishes, I could not resist the temptation to try tiramisu in Italy.

Al Duello’s preparation had much more body than tiramisu I have had before. The ladyfingers still possessed their shape and had bite left to them. In America many places use whipped cream where mascarpone should be used. The mascarpone is much heavier and lent a weight to the dish. It was garnished with a generous amount of cocoa and chocolate shavings. It was a perfect ending to an already great meal.

Ristorante Al Duello is a quaint restaurant that is full of charm. Coupled with great food that is Italian at its finest – it was truly a memorable meal. 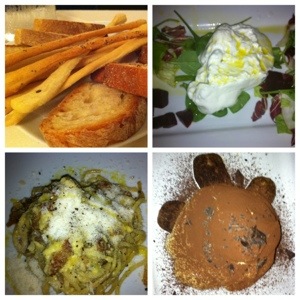