Tempo Doeloe: Full of Spice and Everything Nice

Tempo Doeloe, an Indonesian restaurant in Amsterdam, is the epitome of the tired cliché “good things come in small packages.” By all accounts its space is very small and somewhat unremarkable. But it is what happens within those walls that make it notable.

Sans the required reservations, I showed up in front of Tempo Doeloe at 9 p.m. one Thursday. I rang the doorbell and anxiously waited to see if I would be beckoned inside. A short time later the owner greeted me. After the obligatory explanation about how I failed to make a reservation but was really hoping to snag a table (or closet), he nodded and escorted me to the bar where other diners were waiting.

At the bar I was greeted by a lovely young lady around my age who turned out to be the owner’s daughter. She had a kind eyes and a welcoming smile and we instantly clicked. While bar seating is often categorized as second place, I love it. The entire evening I felt like a VIP and even got to sample interesting things like Pisang Ambon, a Dutch-made banana liqueur.

When it came time to order I was met by a round, jovial woman, who I immediately felt warmth in her presence. As is often the case, I turned the ordering process to my server. I told her I would like to do the tasting menu and that she could pick all of the dishes. My only stipulation was that the none of them be so hot as to sear off my taste buds.

For the next several hours I enjoyed course after course — for a total of six dishes. The flavors and spiciness awakened and challenged my taste buds. There was sweetness from coconut, freshness from citrus and heat from chillies. I enjoyed dishes that ranged from chicken soup to the classic rijsttafel (Dutch for rice table.) By the final dish – a mango dessert – I felt like I was busting at the seams.

I ended up staying well after the restaurant had closed. The chef even came out to see how I liked my food and informed me that since I had survived I had graduated to the next level of spiciness. Before I left the bartender told me she would love it if I would return to Amsterdam and come back to Tempo Doeloe.

And I will definitely be back, but as to whether I will try spicier dishes…well that is another story. 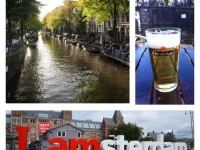 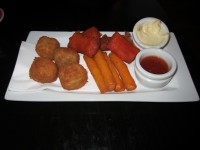 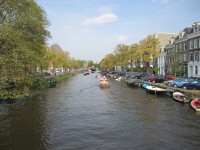