A lot of times when we try a cocktail that tastes unlike something we have ever had before, that is a bad thing. While we are adventurous and will try anything once, generally we like to make baby steps away from the old familiars when it comes to drinks. But in the case of the Herbal Remedy from Raven, we tried something unique AND we liked it. Talk about success!

With a good selection of cocktails built around a fun theme (Vampire,-y a little haunted-sounding) that is perfect for fall, we wanted to take advantage of Raven’s expert mixology, but didn’t want to go too far out on a limb since our most recent trip happened to take place on a Monday, and it’s not always a good idea to be experimental that early in the week (for us anyway). I wasn’t willing to get creative with the liquor so was looking for something with vodka. A lot of places don’t do much with vodka, and it seems like a lot of mixologists think it is boring, so I appreciate a new approach that allows me to stick with a base I know I like.

The Herbal Remedy contained Zubrowka Bison Grass vodka, squeezed citrus, organic apple juice, Thai basil and agave. Apple juice isn’t often on a drink menu, and I don’t even think I totally understand what Bison Grass vodka is (a brand name? Grass infused into the vodka?), so it seemed like a bit of a gamble, or at least a unique pairing. As we later found out, the vodka was once banned in the U.S., and has just been allowed in the last couple of years which made it even more exotic. We were in luck – the apple juice and agave lent sweetness, while the citrus provided a bit of sour, and the basil introduced clean-tasting, mellow notes.

It was a really well-balanced cocktail that incorporated the best of different tastes with a very drinkable base spirit. Overall, it may be my preferred summer-to-fall tansition cocktail. Afterall, you need a solid drink to help you get over the fact that another summer has passed. I look forward to a non-Monday visit. And to ordering tater tots. 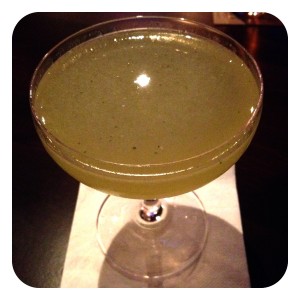 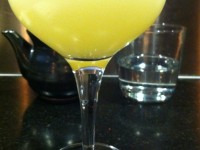