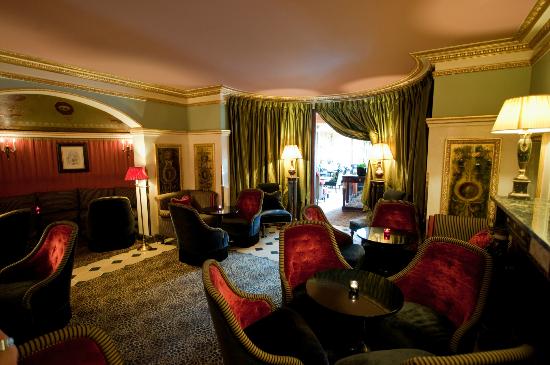 “I drink to separate my body from my soul.” – Oscar Wilde

Once the center of the literary universe, Paris is filled with former haunts of word slingers. On more than one trip to the city, I have found myself on a gin-soaked trail of F. Scott Fitzgerald and Ernest Hemingway in hot pursuit of a way of life that was wrapped in literary rapture, booze and romance.

An early afternoon Bloody Mary at the expat hangout, Harry’s New York Bar, on Rue Daunou. A midday glass of wine at Cafe de Flore or Les Deux Magots in Saint Germaine. A serendipity cocktail at the Hemingway Bar at the Ritz. You see, many writers were also prolific drinkers, so the path almost always leads to a bar.

At 11:30 p.m. on my final night in Paris, I felt that familiar tug. “One more drink with an old friend,” said a whisper.

After a short stroll, I found myself down Rue des Beaux Arts at the front doors of L’Hôtel. In its former incarnation, it had been called Hôtel d’Alsace, and it was the final home of Oscar Wilde. It was here where the impoverished author would crumple within himself and cease to write. His final days would be spent in a substandard room where he is said to have uttered, “My wallpaper and I are fighting a duel to the death. One of us has got to go.”

As I pass through the doors, it has been more than a century since Wilde’s death. Fifteen years after a major remodel where the building would sheds its skin and be reborn into the luxury establishment, L’Hôtel. Swathed in fine silk curtains and punctuated with marble columns and plush, velvet tufted chairs, the space has Paris panache.

On this particular evening the bar, simply named Le Bar, is quiet. Two businessmen are settling their tab for the night. There is a couple in the corner canoodling who don’t seem to notice we are there. I collapse into the stuffed chair and let it envelop me. I order a Saint Germain Sour (Whisky Maker’s Mark, Saint Germain, Citron Vert), which I take slow deliberate slips from, so I can feel the whiskey run through my veins. I want to take in every moment, because I know it will be over all too soon.

Wilde probably wouldn’t have recognized his former home. Whatever was left of the hotel’s previous identity has been erased with time and remodels. And I know that before long it will be as if I was never here. Space and time will pass through me, and I will get farther from this moment. But in the months after this trip when you ask about my favorite memory from Paris, I will say, “Drinking with Oscar Wilde.”


Nice succinct post, Jenna! Like an apéritif cocktail. Drinking AND writing with Oscar Wilde! Who knew that writers love to drink 😉


It is crazy; I never would have guessed writers were big drinkers. 😉 As always, thanks for reading and commenting, Alastair!


Oscar Wilde was no casual drinker though, and this is what he had to say about drinking absinthe: “The first stage is like ordinary drinking, the second when you begin to see monstrous and cruel things, but if you can persevere you will enter in upon the third stage where you see things that you want to see, wonderful curious things.”