At the Chateau Marmont 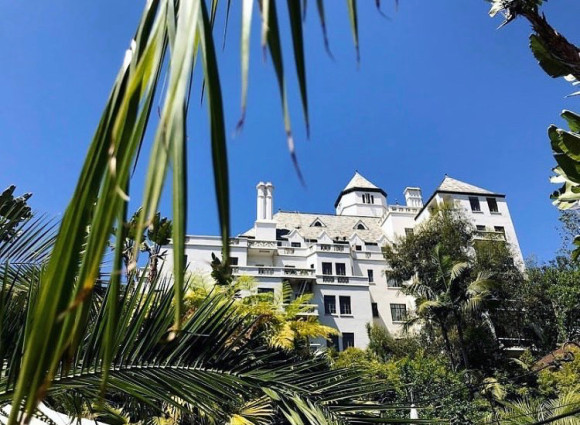 I went to West Hollywood not long ago to see the great French chateau on the hill where certain rich and famous go to play. I hadn’t come only to visit the Chateau Marmont. I was here from San Francisco trying to escape the restlessness and the malaise that tends to set in after too many days spent under steel colored skies. But I had found myself here, and it was by no accident. I had it on good authority that people— serious people, not just the frivolous—have espoused the mystical potency of the place. And I wanted a little of it.

Hotel establishments have always been of interest to me with their transient energy and because of people’s propensity for carrying on in ways they wouldn’t ​elsewhere. I am particularly fond of old hotels with stories that live deep within the walls. The Chateau Marmont is filled with stories, even though nobody much likes to talk about them. So, they live on as a sort of lore that ​people only whisper about. ​​​

It is a twisted history with tragedy, trysts and tomfoolery. John Belushi died here. Jim Morrison lived here.​ ​Jean Harlow and Clark Gable had an affair here. ​Billy Idol trashed a room here.  And, numerous other guests like Hunter S. Thompson, Led Zeppelin​, F. Scott Fitzgerald and Mick Jagger got​ their kicks here.​ ​Social mores are skirted and anything goes, and if you believe the stories, anything has.​ ​It is a reminder of what money can buy you but mostly for those who don’t have much of it.

Imagined as luxury residences when it opened in 1929, it found little demand for such type of living after the onset of the Great Depression. By 1931, it was sold and converted to a hotel that has been attracting the well-heeled since.

Inside, it is a stage set worthy of Hollywood. A handsome lobby with dark wooden beams and cathedral arches. Its big windows usher in light but still leave the space painted in a moody hue. There is a familiar feeling to it all with the deliberately mismatched vintage furniture that tells you this is a place you have known before.

A stay at the Chateau Marmont will cost you between $550-5000 a night. Since I haven’t taken to living beyond my means, I chose an early breakfast in the hours before my flight. I take my meal outside, because if you are lucky enough to be in L.A. in January then it is a sin not to dine al fresco. Even on this crisp winter day, the heavens have opened up and showered the patio in sunlight.

With the perfect corner table, I have all the patio in view. Location is everything, because part of the reason you come is to watch these other beings in their natural habitat. But on this morning it is quiet with just a dozen or so other guests. The server tells me that more people will come later once they have slept off their hangovers from the night before. By then, I will be long gone.

I take in what I can and steal furtive glances from behind my sunglasses. There are meetings in progress–important meetings I can only presume. Across the way, there is a guy who looks vaguely familiar. He might be somebody but not someone enough that I know who. His female companion is wearing a jean jacket with words scrawled in sharpie. I am certain it is designer.

I eat my ancient grains and  alternate sips of coffee and Bloody Mary. The hours are waning, and before long I will be back in San Francisco. It is a beautiful patio, and the service is courteous. I had managed the cost of entry — $54.05 for breakfast — but I couldn’t shake the feeling that this wasn’t meant for me.

There is a natural inclination to want to see how the other half lives, and places like the Chateau Marmont provide a glimpse into a life you will never occupy. I knew this world was not built for me, but I still wondered if maybe some of its magical qualities had rubbed off. But when I exited the hotel onto Sunset Boulevard in the still early hours of the day, I found that I was just me.